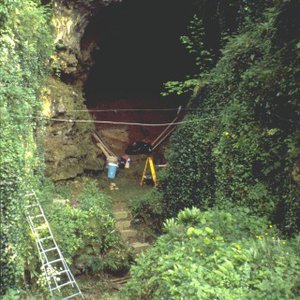 Fontechevade is a cave site in the Charente region of southern France. It was best known from the excavations of G. Henri-Martin who excavated there from 1937 to 1954 and fully published the results. Based on this work, the site became the type site for the Tayacian stone tool industry. Tayacian is characterized by a rather non-descript technology and a high percentage of notched tools. The site was also known for two hominin fossil fragments. The site was re-excavated from 1994 to 1999 by a team from the University of Pennsylvania (Dibble, Chase and McPherron) and the University of Perpignan (Debénath), and a monograph was published in 2009. The new excavations and a re-analysis of the Henri-Martin collection demonstrated that the Tayacian was a result of site formation processes, and that the majority of deposits in the cave contain very little evidence of hominin behaviors there. The excavations were conducted using the same methodologies that Dibble and colleagues developed at Combe-Capelle Bas. The full database can be found at www.oldstoneage.com. Here a further cleaned version of this database is provided along with artifact images.

The Fontechevade data are currently restricted to project members.